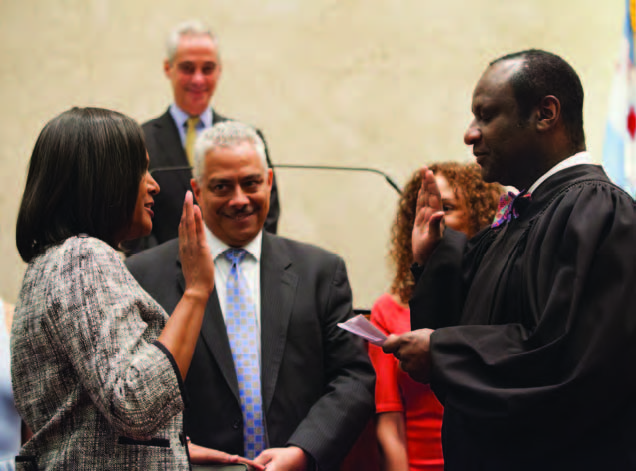 Sophia King was sworn in as the new 4th Ward alderman on April 13. (Photo by Brooke Collins, City of Chicago)

Sophia Dorsey King said she has tried to follow her mother’s advice “to go out and help someone.” She’s been doing that for at least 30 years, and now she will do that in a larger role as the new 4th Ward alderman.

Mayor Rahm Emanuel selected King to replace Will Burns, who accepted an offer in the private sector earlier this year after serving as alderman since 2011. King was confirmed by the City Council and sworn in on April 13.

There will be a special election to fill the seat in February 2017, and some have wondered why the 4th Ward race could not be added to the November 2016 ballot.

However, currently, State law does not allow a municipal office on the November general election ballot. Under the law, the municipal election cycles are in February of odd-numbered years, and the February 2017 cycle is there to allow for special elections for any vacancies in municipal offices that could occur between now and October 2016.

In addition, “There has to be an allowance for a run-off election in April 2017 if no one receives 50% plus one in the first round in February 2017,” said James P. Allen, communications director, Chicago Board of Elections.

After receiving her BS in chemistry from the University of Illinois in 1988, King completed her MS in education and social policy from Northwestern University two years later.

King stated that she “learned a lot through being trained as a teacher” and as an athlete in her youth. From education she learned she “loved teaching,” noting that feeling will “never leave” her. From early athletics, she said she learned how to “relate to people and to work with them in groups.” She also admitted that when she was young she was a “tomboy,” as she enjoyed competition and doing her best.

For the past 27 years, King has been married to Alan King. The couple has two adult daughters. After Burns resigned, Emanuel encouraged people to send in applications for the post to a City website.

“My friends encouraged me to apply when the position opened,” said King.

Jesse Ruiz, whom Emanuel has appointed to several posts, said he gladly wrote a recommendation for King in support of her application. “She is an active, committed, and tireless” community activist, said Ruiz, who is president of the Chicago Park District Board of Commissioners.

“She is very good at finding resources and recruiting people, as she was with me,” Ruiz explained. “She enlisted me to attend a meeting addressing youth violence, even though I live in another part of town.”

King also is a friend of President Barack Obama and worked on his 2008 campaign.

That same year, the then 4th Ward alderman Toni Preckwinkle appointed King as Kenwood Park Advisory Board president. During her term, King endeavored to resolve community conflicts regarding the use of Kenwood Park, unify the stakeholders, and establish improvements for the park. King left the board in 2015.

King noted she will not “set up priorities so early without having a full understanding of the diversity that comprises the 4th Ward. I would like to speak to the various constituents in order to formulate a strategic plan.”

One of her early priorities is fighting crime in the ward, however. “The violence is immediate, and we need to find both short-term as well as long-term solutions,” King said, noting that reducing violence is “an organic process where you need to look at both the direct and indirect stimuli.”

In 2013, King and her husband joined attorney William Lowry; his wife, Cheryl; and others in Lowry’s call to action to address gun violence in the neighborhood. The outcome was The It’s Time Organization (TITO), a philanthropic organization that funds violence intervention programs in the 3rd, 4th, and 5th Wards. William Lowry serves as its executive director. TITO was “the first time I had a chance to work with Sophia,” Lowry said. “Here is where she shone, when she facilitated our discussion group: she has a calm, focused, and resolute manner. When

the discussion deviated off topic, she quickly redirected the group back on track. She not only hears what is being said, she listens, and her approach is inclusive and fair.”

Fourth Ward Quad City Development Corporation (QCDC) executive director Bernita Johnson- Gabriel said, “I’ve had the chance to work with Sophia King on an athletic program, before meeting her again at the Lowrys’, and she has integrity and commitment. I have no doubt that she will work hard to identify the needs of a very diverse ward and to develop well thought out strategies.”

Regarding employment, King said job creation is about leveraging resources to bring something into fruition. It all comes down to the resources and how to prioritize limited resources. In 2010, King brought together a group of female leaders to found the nonprofit Harriet’s Daughters.

Its mission is to advocate for, create, and support policies and processes that secure employment and wealth creation opportunities for African-American communities.

“We wanted to ascertain where we could help,” King explained. “The mission has evolved to its current focus on jobs and is twopronged: to increase the jobs available and to increase the capacity to those jobs. The job process is about procurement and who controls it.”

“The job of the alderman is akin to being the mayor of a small town,” said Cook County Board president Toni Preckwinkle. “Residents expect the alderman to address their concerns about everything from parks to potholes to schools to garbage collection. It is a very difficult job that requires a lot of hard work and great dedication and commitment to residents.”

Preckwinkle added she is hopeful the new 4th Ward alderman will be up to these challenges.

South Loop Neighbors president Susan Ohde said that, although the “South Loop is a small portion of the 4th Ward, Alderman Burns understood the importance of our community and joined us in our conversations. We look forward to meeting Alderman King and building a relationship of mutual support.”

King noted she is excited by divergent issues and interests—to hear the different voices representing them and then to begin working together on finding a solution or set of solutions.

“It may take longer, but it is about listening to the passions,” King explained. “Solutions are about getting as many involved in the 4th Ward and then coming up with aligned goals and priorities.”

Ruiz said, “She is the consummate neighbor. Sophia King is someone who you would want as a neighbor because she will always be looking out for you.”