Ida B. Wells Drive Is Officially Unveiled In Downtown Chicago As A Hero Finally Gets Her Due

HAROLD WASHINGTON LIBRARY — In a building named for the first — and only— black mayor of Chicago, activists and politicians on Monday officially unveiled the first street in the history of the city to be named for a black woman.

After years of work from public and private stakeholders — and the descendants of Wells herself — to recognize the pioneering journalist and Civil Rights activist’s contributions to Chicago, the unveiling ceremony became a celebration at the Harold Washington Library.

People traveled far to commemorate the occasion, including a woman who came from Holly Springs, Miss., Wells’ birthplace.

Rev. Leona Harris, executive director of the Ida B. Wells-Barnett Museum in Holly Springs, has spent most of her life ensuring that Wells’ legacy endures for generations to come. She was determined to make the trip for this special day.

“So many people in our history, especially women, do not get recognized,” said Harris, who, like her hero, was born and raised in Holly Springs.

“Ida B. Wells was an uncompromising soul. She didn’t give up.” 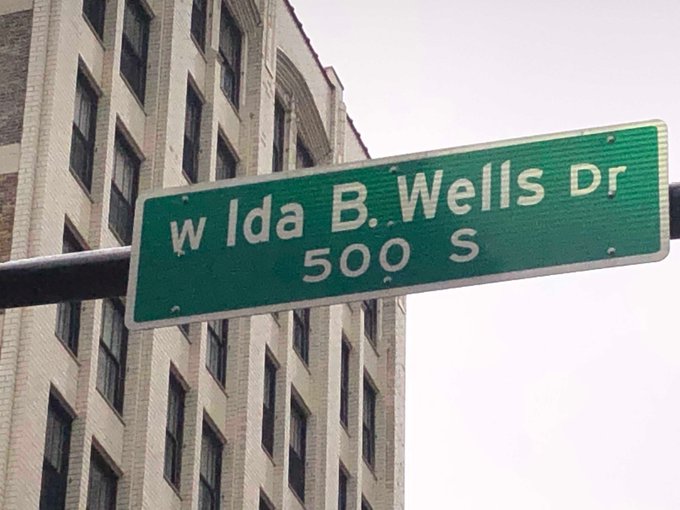 Sandra Young, a former resident of the Ida B. Wells Homes and member of the Ida B. Wells Commemorative Art Committee that raised money for a statue of Wells to be installed on the former site of the housing project, said the group had been working for more than 20 years to get recognition for the investigative journalist.

Emceed by longtime local journalist Robin Robinson, several politicians spoke at the ceremony, including Alds. Sophia King (4th) and Brendan Reilly (42nd), Mayor Rahm Emanuel and Cook County Board President Toni Preckwinkle, who spoke of Wells’ humble beginnings as a teacher-turned-journalist at the end of the 19th Century.

“It is my hope that the boys and girls who learn more about her are inspired to become teachers, entrepreneurs, realize their unlimited potential, and speak truth to power, just like Ida,” Preckwinkle said.

Wells’ great-granddaughter, Michelle Duster, credited the League of Women Voters for helping the effort, noting that her father’s birthday was the day before the sign unveiling.

“I know he and the ancestors are celebrating with us,” said Duster, who also recognized the family members who traveled from out of state to attend the ceremony.

New York Times journalist Hannah-Nikole Jones spoke of Wells’ fearlessness, and how, even in the face of danger, Wells never backed down.

“Imagine going to places where black men and women had just been lynched and asking questions,” said Jones, adding that the people who committed the murders usually wrote the reports, and that the same holds true today. “At the time she died she was the most famous black woman in the world, but it took until 2019 for her to be recognized. This is a step to recognizing the true history of our country.”

The event’s keynote speaker, Chaz Ebert, noted Wells’ global reach, and how she, like the black female mathematicians featured in the 2016 movie “Hidden Figures,” is herself a hidden figure.

“There are many more like Ida, and we have to continue to fight for these figures because they shape this world,” Ebert said. “It’s important to know that they came from somewhere and that they mattered. Ida is now part of the fabric of Chicago.”

Congress Parkway was named more than a century ago — the Eisenhower used to be called the Congress Expy.

Duster hopes the street renaming will inspire other cities to follow suit.

“Street names should reflect the population,” Duster said. “There needs to be more proportional representation. It helps people to see themselves in public spaces, and it helps others to learn and be inspired by people who don’t look like them.”

Ida B. Wells Drive Is Officially Unveiled In Downtown Chicago As A Hero Finally Gets Her Due