Ald. Jason Ervin said with so many Black candidates, the community risks “losing it all.” But the newest mayoral challenger, Ald. Sophia King, called it “shortsighted” to think “Black candidates will only get Black votes.” 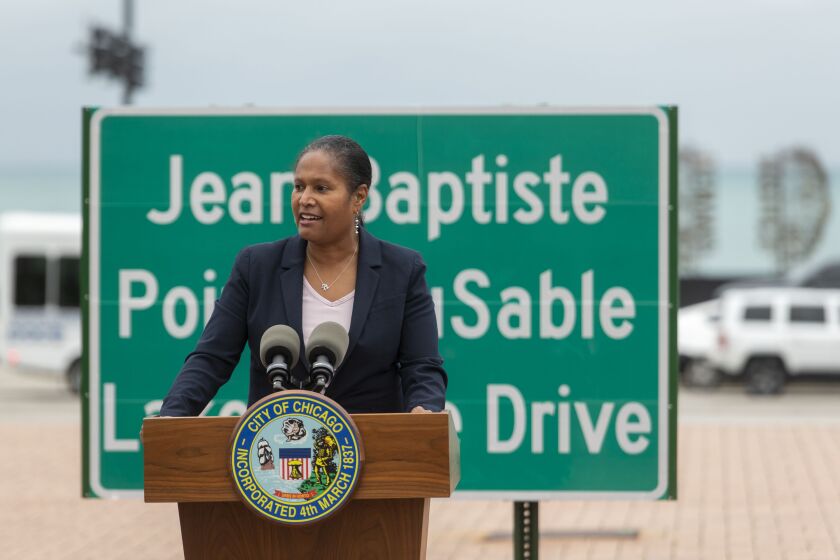 Ald. Sophia King (4th) said Thursday she will “not be bullied” out of the race for mayor of Chicago by fears that, with seven Black candidates and a divided, diminished African American vote, the Black community risks “losing it all.”

The chairman of the City Council’s Black Caucus, Ald. Jason Ervin (28th), gave Mayor Lori Lightfoot an early endorsement and has argued the African American community hasn’t “seen or felt this level of commitment from the mayor’s office since the days of Harold Washington.”

Ervin responded to King’s entry into the mayor’s race this week by harkening back decades, to the bitter split between council members Eugene Sawyer and Tim Evans that paved the way for the 1989 election of Mayor Richard M. Daley.

“With so many black candidates in the race and more expected to enter, we run the risk of losing it all,” Ervin said in a news release.

On Thursday, King stood her ground just as she did during high-profile confrontations with Lightfoot over civilian police review, renaming Jean Baptiste Point DuSable Lake Shore Drive, the future of the old Michael Reese Hospital site and the mayor’s decision to terminate the city’s 15-year-old redevelopment agreement with Mercy Hospital.

“I’m certainly not gonna be bullied out of the race. … He’s presenting a false narrative and we need to get out of false choices. A Black candidate, as we’ve seen, can represent the entire city. I expect to get votes — I will seek votes — from the entire city, not just one sector of the city,” King told the Sun-Times.

Responding directly to Ervin’s warning, she said: “He’s right. You do need a consensus around a new leader. But it’s shortsighted to think that Black candidates will only get Black votes.”

Ervin pushed back. He branded his argument about a divided Black vote “pure math.”

County Board President Toni Preckwinkle finished second, qualifying for the runoff with 89,343 votes, or 16%.

“With so many candidates in the race, someone else could easily come up with 20 or 25% of the vote and be successful to get to the runoff. … At the rate that we’re going, and with more people expected to get into the race, it may be almost impossible for anybody to get to a threshold where they can make the runoff,” he said.

The political stakes are so high, Ervin said, he’s not about to leave it to the candidates to decide who drops out to winnow the crowded field.

“We as a community need to come together and have some conversations about what makes the most sense for the community,” he said.

“I’ve reached out to a couple of local leaders. That’s something that is in the works. … Just give it some time. I’m not saying exactly what we’re doing, but rest assured that we’re not just gonna sit by and allow our community to self-destruct politically.”

But, King said, you “don’t have to go that far back” to understand “this fear of having Blacks split votes” is unfounded.

“In the last election … that this mayor won, there were two Black women … in the runoff. In the top six people, there were five people of color. Four African American.”

Lightfoot has argued her signature Invest South/West plan to rebuild 10 long-neglected neighborhood commercial strips has delivered for the Black community in ways not seen since Washington.

During a contentious, closed-door meeting with the Hispanic Caucus last fall, Lightfoot complained about being attacked by Black leaders over the $31.5 million guaranteed basic income pilot program, which was seen as “a handout for Latinos” that “didn’t include reparations.”

Ald. Carlos Ramirez-Rosa (35th) later said the mayor had argued “she’s poured a f--- ton of money into Black communities,” and that no mayor — not even Washington — had done more for the African American community.

Thursday, King said she would put her own record of accomplishment for the African American community up against Lightfoot’s any day of the week, citing her work on a $15 minimum wage, renaming Congress Parkway after Ida B. Wells and ensuring 60% minority contracting in the development of the former site of Michael Reese Hospital.