New Chicago Police Department officers take an oath during their graduation at Navy Pier in March.

Mayoral challenger Sophia King vowed Thursday to tackle a vexing issue that Chicago mayors have been avoiding for decades — by putting more police officers where calls for service are the highest.

Last year, a model designed by the University of Chicago Crime Lab called for a radical approach to the perennial demand to assign more Chicago Police Department officers in those violent neighborhoods most in need of steadily diminishing police resources.

The U of C’s pro bono study created a formula taking into account calls for service, total violent crime in the area, population and attrition of retiring officers.

Under the formula, veterans and rookies would be reassigned immediately, based on those and other factors. The conclusion: CPD can staff high-crime districts at proper levels, even after a recent wave of retirements.

Mayor Lori Lightfoot and her hand-picked Police Supt. David Brown, instead, chose a politically timid approach that will take years.

Under their plan, high-crime districts get more police as rookies graduate from the academy and complete an 18-month probation. It would take about two years to reach proper staffing levels in the South and West side police districts where shootings and drug dealing are worst.

King, who represents the 4th Ward in the Chicago City Council, vowed to tackle the problem more boldly.

“We can have a more equitable distribution of police. ... Making sure that the police are in the places that they need to be. The University of Chicago study has told us that that’s not the case. We need to look into that first. We also need to look at, perhaps, the shifts and how we can get more officers on the beats right away. Making sure they’re in their neighborhoods and not downtown,” King told the Sun-Times.

“We also know that 50% of calls to 911 are for nonviolent offenses. They’re for social services, homelessness and mental health insecurity. We need to bring people who are trained in those areas. ... And we let police focus on the things that they’re trained on.” 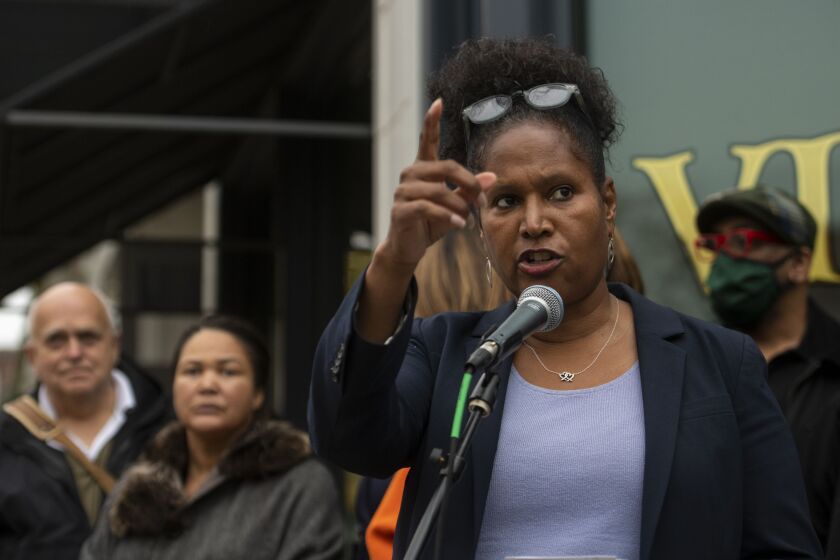 Ald. Sophia King (4th), joined by residents and other elected officials, speaks at a news conference at 53rd Street and Harper Avenue in November about recent violence in the Hyde Park neighborhood.

After a tidal wave of police retirements and depressed turnout for police exams that once drew thousands, the police department now has 11,762 sworn officers, down from 13,353 officers before Lightfoot took office.

To stop the exodus, King wants to implement incentives and apply those same bonuses to teachers, who also are leaving in droves.

“We need to provide incentives for them to live in our communities. Whether that’s tax breaks, mortgage breaks, interest rate breaks. There are so many different ways that we can approach that,” she said.

If elected, King said she would ultimately seek to restore those positions. But, she said, filling the 1,408 sworn vacancies must come first.

“It goes back to bringing back respect. Humanizing that profession again. And making sure that police and teachers feel supported.”

King, chair of the City Council’s Progressive Caucus, also highlighted what she sees as Lightfoot’s broken campaign promises that, she claims, have shattered the lakefront political base that was key to Lightfoot’s 2019 victory.

She noted Lightfoot campaigned in support of an elected school board, only to fight it once in office. A 21-member board eventually was foisted upon her by the state legislature.

It’s the same with civilian police oversight, which King has championed and the mayor has been slow to implement.

“We could have had $200 million extra in our budget as a progressive [revenue] stream for homelessness, for pensions, maybe racial redress.”